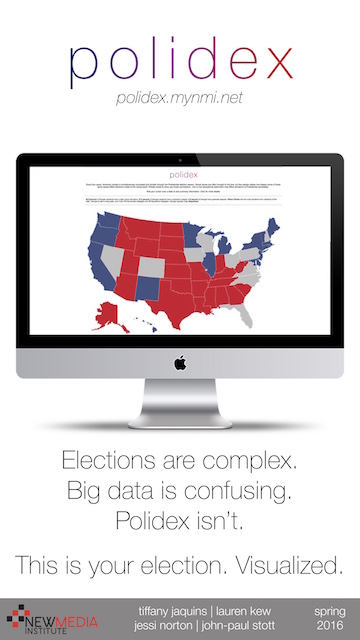 Every four years, American society is simultaneously connected and divided through the Presidential election season. One of the biggest issues faced at voting booths is the lack of millennial turnout. Our goal is to uncover a story within the political process that will make millennials feel personally invested in the election season.

While politicians have been using big data for years to sell voters on why they should get their vote, we want to use big data to tell the story of how demographics can affect the Presidential election process. Polidex was originally going to be a Presidential Candidate Cliffnotes for young voters to seek out non-media information from about the candidates. However, through research and building our app, the Polidex team realized that we needed something more.

Voters care about social issues, but they might not be aware of how they directly affect politics and elections. Polidex is a web application that will visualize the connection between voter education levels and campaign finance donations.

Polidex allows users to see how much of a state’s population has a high school, college and postgraduate degree. It will also show which Presidential candidate has the leading amount of donations from the state, whether or not it is a swing state and how many delegates it has. If the state is not a swing state, Polidex will let users know which party typically takes the vote from this state.

Using HTML, CSS and JavaScript, Polidex is designed to be easy for users to understand and get information from. We hope that telling this story will increase young voter interest in issues that affect donations to certain Presidential candidates. In showing a potential connection between voter education level and campaign finance, we hope that young voters will understand that the social issues they care most about are worth coming out to the polls for because of their direct impact on local, state and national elections.