NMI Beyond the NMI 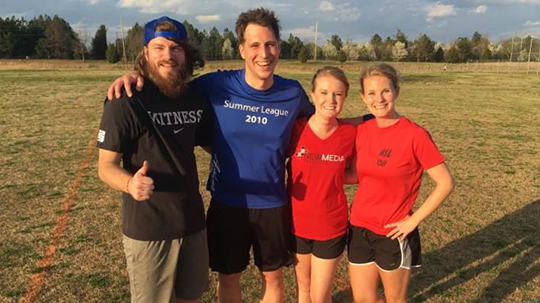 This spring a few of the NMI team members decided to take team building to the next level. John Weatherford and Lauren Baggett were veterans of the local ultimate frisbee league and convinced Chris Gerlach and Megan Ward to join in for the spring season. Though united at the office, John and Chris competed against Megan and Lauren as their teams battled it out for bragging rights each Monday night. Who came out on top? It’s up for debate, but a great time was had all around.

In the midst of the frisbee battle, Megan Ward, Kaitlin Kent and Nicole Stephens joined other members of the UGA community for a campus 5K. Even Stella, the NMI pup, joined in. The ladies had a blast running  – ok walking – and look forward to more outdoor fun in the Fa